ASGA will #CelebrateDifferences throughout April with a variety of activities aimed at increasing understanding of autism in the community. For more information go to [autismakron.org/acceptance]autismakron.org/autismacceptance.

“We are proud that Ohio is a leader among states,” continued Cramer, “Gov. DeWine issued a proclamation today recognizing April as ‘Autism Acceptance Month’ in Ohio. The proclamation states, ‘the purpose of Autism Acceptance Month in Ohio is to spread awareness, foster acceptance, and identify the public policy improvements needed for people with autism to live fully across all areas of life.’”

Cramer continued, “We also thank Reps. Bob Young (R-Green) and Casey Weinstein (D-Hudson) for introducing joint bipartisan legislation (H.B. 242) that designates April as Autism Acceptance Month in Ohio, and upholds the principles of the initiative stating acceptance is the first step to inclusion.

“It’s exciting that we live in a time when there is a true focus on what inclusion means,” Cramer concluded.  “For the autism community, inclusion means individuals with autism live, work, and play in our community, but still experience challenges due to a lack of understanding the characteristics of autism and the attitudinal and environmental accommodations that are often needed to take advantage of all our community has to offer to the fullest extent of an individual’s ability level. Our efforts must continue beyond today, also accepting the hard work it takes to truly be an inclusive state and community.”

Check out ways to #CelebrateDifferences with us HERE. 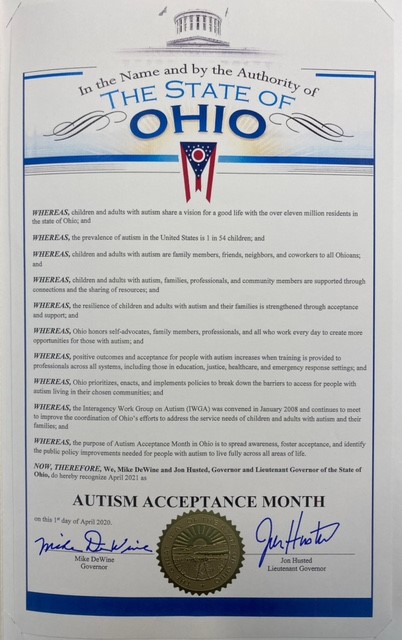 About ASGA: The Autism Society of Greater Akron is working with its sister affiliates across Ohio on the state designation.  ASGA is one of 76 affiliates nationwide that are part of the Autism Society of America, the nation’s largest and oldest grassroots autism organization. ASGA serves Summit, Stark, Wayne, Portage, and Medina counties. ASGA is a proud member of the Ohio Family Network (OFN), connecting people with disabilities and their families to local information and resources within their communities.  We believe OFN provides opportunities to share ideas, find solutions to common challenges and inspire and strengthen each other.

About Autism Acceptance Month: There has never been a formal designation for the month, regardless of terminology. In 1972 the Autism Society of America founded “National Autistic Children’s Week” which has since evolved into a global grassroots movement for April to celebrate Autism Awareness Month.

The United Nations recognizes April 2nd as World Autism Awareness Day. This year, the Autism Society of America suggests the international community update this day of recognition to be known as Autism Acceptance Day, as we work towards more inclusion and meaningful change.

About Autism: According to the CDC, autism spectrum disorder (ASD) is a developmental disability that can cause significant social, communication and behavioral challenges. There is often nothing about how people with ASD look that sets them apart from other people, but people with ASD may communicate, interact, behave, and learn in ways that are different from most other people. The learning, thinking, and problem-solving abilities of people with ASD can range from gifted to severely challenged. Some people with ASD need a lot of help in their daily lives; others need less.