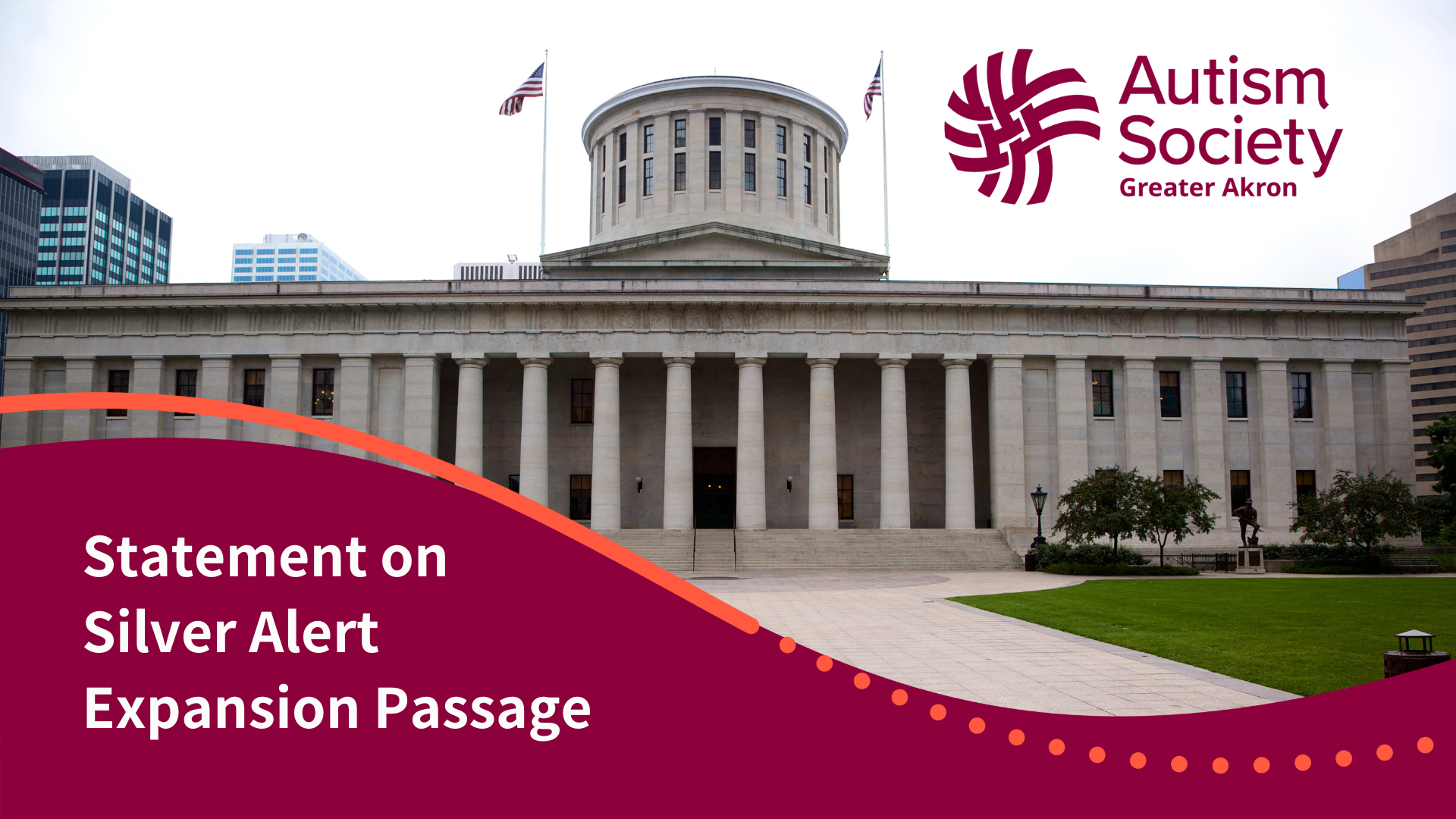 Akron, OH, December 15, 2022 - The Autism Society of Greater Akron (ASGA), along with the Autism Society of America and its fellow Ohio affiliates, today announced that in the early morning hours of December 15, the Ohio Senate and House passed SB 16 with an amendment to update the criteria for the state’s Silver Alert public notification system to include individuals with Autism and other developmental disabilities.

“Working together, we were able to urge lawmakers to make a change in our state that will have the immediate impact of saving the lives of individuals with Autism and other developmental disabilities,” said Laurie Cramer, Executive Director of ASGA. “We very much appreciate Senator Tim Schaffer’s leadership to protect those with Autism in our community by managing the passage of this amendment through the lame duck session.”

The Silver Alert system allows for the governor's office, the department of public safety, the attorney general, law enforcement agencies, the state's public and commercial television and radio broadcasters to immediately coordinate to disseminate information on the missing person. This bill updates the Silver Alert system to now include those with Autism Spectrum Disorder and other developmental disabilities.

Cramer continued, “We thank Sen. Schaffer for working with the Autism Society of America, and our seven affiliates throughout Ohio, to update this essential alert system to act fast to ensure Ohio can devote all available resources to locate individuals as soon as possible to prevent injuries or even deaths.”

The Centers for Disease Control and Prevention (CDC) reports that one in 44 children have Autism Spectrum Disorder and that over half, or about 60%, were reported to wander or elope from safe environments. Also according to the CDC, over five million adults live with Autism, many of whom also are known for becoming lost when being separated from caregivers or leaving safe locations; like many statistics that relate to adults, to our knowledge the research on the number of adult individuals who wander has not been conducted.

The Autism Society of Greater Akron's (ASGA) mission is to create connections, empowering everyone in the Autism community with the resources needed to live fully. ASGA supports the Autism community with information and referral to local services and provides inclusive programs and events for individuals with Autism and their families. ASGA also advocates for systemic policy changes at the local, state and federal levels that reduce disparities for people living with Autism.  ASGA is an affiliate of the Autism Society of America, and was founded in 1987 by parent volunteers of children with Autism and serves Summit, Medina, Portage, Wayne, and Stark counties.